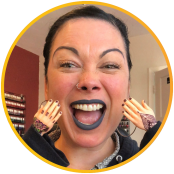 Growing up in the industry her entire life, Liza Waitzman found herself getting licensed as a nail tech back in 2005. In the beginning, it was truly a struggle trying to build clientele as a single mother with two little ones. She is now the owner of Das Nail Haus of Beauty. Her kids are now adults and she is married to her biggest supporter, Obadiah. Now she is so proud to say that she is completely booked throughout the year and loves and appreciates her clients that have supported her along the way. When she started competing in NTNA several years ago, she hardly believed she was good enough to enter.  Through the years now, she has found her true calling as a nail artist and challenges herself to be better than yesterday. Through this All Starts competition, Liza looks forward to wake up that inner beast that thrives on the adrenaline rush NTNA gives her and hopes to see the inside of OPI Headquarters!

Where in the World? 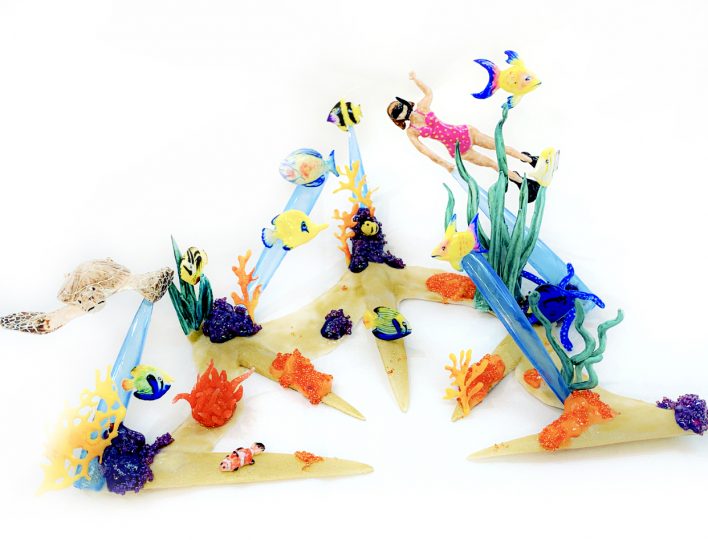 OPI is known for its location-based color collections. For this week’s challenge, we were asked to construct a 3-D set based on a landmark or other iconic image associated with that location on 10 nail tips of any size, not on actual hands.

For this set, I chose Fiji!  Off the northern coast of Fiji rests the third largest coral reef in the world, stretching 200 kilometers in length!  My inspiration comes from just there, a majestic  tropical underwater oasis full of sea life and a curious snorkeler exploring its beauty.

It was really important for me to push myself and do something other than I have in the past.  I knew immediately the visionary aspect but thought…. how cool would it be to create a 3D piece that seems to float and is visually appealing at any angle?

I created all of my sea life for this piece with OPI’s liquid powder and acrylic system.  I started by shaping them on wax paper (and forms) and after I was satisfied with the shape, I then flipped the subject and continued shaping on the opposite side to create my 3-D pieces. After having my complete  subjects, I used an E-File to smooth and soften my pieces and to also make definitions and toning. I then painted with the gel-polish OPI sent us along with some acrylic paint for those little fine details.

I used my 10 required tips as the base for my piece.  I used five tips covered in Suzie Slings Mezcal and before curing, I dusted it with OPI’s crystal clear acrylic powder to create a “sandy-like” ocean floor.  I then secured those five pieces with some more acrylic and repeated the steps using the gold gel-polish and powder technique while carefully trying to make sure my base structure was strong enough to hold and secure my reef scene. I then painted the remaining five tips with a combination of Mi Casa Es Blue Casa and OPI top coat to make a translucent blue tint and painted the remaining five tips so they would have the appearance of that beautiful crystal clear water, and those tips were going to hold together the sea life to the sandy bottom base.  I secured all said tips with liquid and powder acrylic

After collecting numerous fish, plants, Terrance the Turtle and snorkeler, I very carefully placed my stars of the show using tweezers, glue, and an instant dry spray, then securing every individual piece (carefully hidden) with more liquid powder and acrylic.

Name of the Game 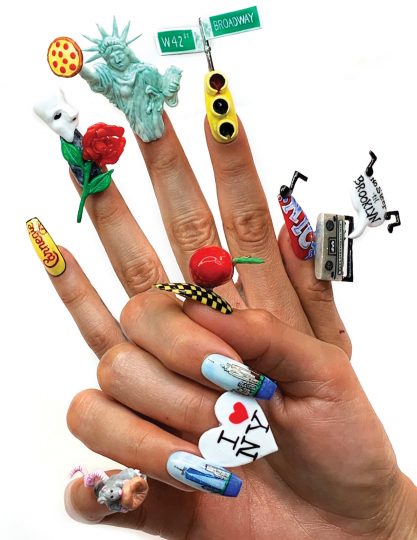 I was lucky enough to get Big Apple Red!  I couldn’t believe it was still up for grabs by the time I had responded so you must know how incredibly stoked I was!

For this set, I wanted to showcase everything that comes to mind when thinking of New York City!  The very second I was approved for this color, I immediately knew I had to sculpt Lady Liberty!  Upon sculpting her, mid-way through I thought to myself “She has to hold a pizza!” I also knew I wanted some kind of city skyline and I wanted to pay respect to 9-11 so the Freedom Tower is a focal point of one of my two handpainted pieces, the other point of reference was the very well know Empire State Building.  I surrounded the two buildings, both on separate nails with surrounding cityscapes. Between the cityscape nails I thought I’d position a sculpted acrylic white heart, to represent the ever-so-well-known I (heart) NY Tee! I also wanted to represent the food aspect of any big city but especially NYC!  I want to eat my way through New York!  So along with Lady Liberty’s hand-tossed pizza, I thought I’d throw out respect to Carnegie Deli!  The original one (no longer standing) was built next to Carnegie Hall, hence the name.  And what other plug to the food scene than a bagel?  Has everyone seen the video-gone-viral of the pizza rat down in the subway recently?  Well I decided to turn his pizza into a bagel since New Yorkers can be a little fussy about the perfect bagel.

Another great memory that I have was being able to actually see a show on Broadway when I was a rug rat, not yet able to appreciate theatre back then.  I hadn’t seen Phantom there but I can only wish that some day I’ll be able to because the Phantom of the Opera is my favorite.

Lastly, my ode to NYC in the 1980s includes boombox’s, graffiti tagging, hip-hop on the rise, and the Beastie Boys. So I have my boombox blaring, “No Sleep ‘til Brooklyn!”

I did all of my building with liquid powder and acrylic, and a lot of patience. The color line that was sent to us by OPI was phenomenal and I was able to use a lot of the colors, even blending them to morph colors. I used my chosen color, Big Apple Red, for every bit of red you see in this set, even the smallest dot at the top of the antennas on my skyscrapers to the red light in my traffic light!  I do, truly LOVE New York, so I hope I did the Big Apple proud.